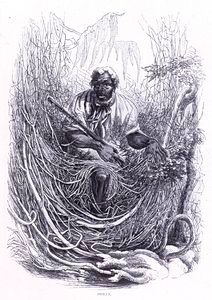 Over more than two centuries men, women, and children escaped from slavery to make the Southern wilderness their home. They hid in the mountains of Virginia and the low swamps of South Carolina; they stayed in the neighborhood or paddled their way to secluded places; they buried themselves underground or built comfortable settlements. Known as maroons, they lived on their own or set up communities in swamps or other areas where they were not likely to be discovered.

Although well-known, feared, celebrated or demonized at the time, the maroons whose stories are the subject of this book have been forgotten, overlooked by academic research that has focused on the Caribbean and Latin America. Who the American maroons were, what led them to choose this way of life over alternatives, what forms of marronage they created, what their individual and collective lives were like, how they organized themselves to survive, and how their particular story fits into the larger narrative of slave resistance are questions that this book seeks to answer.

Watch book trailer
Table of Contents
Introduction
Watch my conversation with Pulitzer Prize winner Eric Foner. CSPAN Book TV
Listen to an interview on WYPR Public Radio
Richard Price, Omar Ali and I on maroons in Suriname, Colombia, and the US.
Blog Post

"Diouf persuasively captures the quiet heroism of North American maroons. Less dramatic and long-lived than many of the maroon communities in Suriname, Jamaica, or Brazil, those in the southern United States were nonetheless ever present. Diouf demonstrates how much freedom mattered to the enslaved and how, within the limited possibilities open to them, those that set off into the inhospitable swamps and forests managed to forge a new life beyond the authority of whitefolks."-Richard Price, author of Maroon Societies

"With impressive research and vivid prose, Diouf directs our attention to maroons within the United States. From the Great Dismal Swamp of Virginia to the frontier regions of Louisiana, she shows, fugitive slaves managed to survive without fleeing to the North. An important addition to our understanding of slave society and black resistance."-Eric Foner, author of The Fiery Trial: Abraham Lincoln and American Slavery

"In contrast to the study of slavery elsewhere, six decades of research in the United States has systematically bypassed the issue of marronage. Sylviane Diouf’s exhaustive research has not only brought the subject to center stage, it offers a framework for recasting the study of runaway slaves throughout the Americas. This is one of those rare books that is at once of scholarly significance and will engage a wide readership."-David Eltis, Robert W. Woodruff Professor of History, Emory University

Working thematically and building on a wealth of archival documents, including legal acts, codes, petitions, letters, county books, parish records, travelers' accounts, plantation records, runaway slave notices, jail advertisements, trial records, newspapers, and Works Progress Administration interviews, Diouf emphasizes maroons in Virginia, the Carolinas, Georgia, and Louisiana. ..In a book that is easily accessible yet rigorously researched, analyzed, and argued, Diouf has made a compelling case that scholars of slavery and of early American history must consider the presence of maroons in the U.S. with a sense of renewed urgency. As she so eloquently and brilliantly shows, maroons exhibited a form of self-determined, autonomy-seeking resistance to slavery that complicates our understanding of fugitivity and freedom as they are generally bound up in a North/South, free/unfree binaristic imaginary. In the end, their forgotten story is one of "courage and resourcefulness, hardships endured and freedoms won" in the midst of a "terrorist system" that sought to violently repress them and exclude their lives from the history of U.S. slave resistance
Sean Gerrity - Journal of the Early Republic

Like other books that Sylviane A. Diouf has written, this one examines a fascinating, though neglected topic in African Diaspora history.... Diouf advances the discourse by using a landscape perspective to offer an alternative to the grand/petit marronage dichotomy .... Her attention to borderland (adjacent to plantations) and hinterland (remote from plantations or cities) conditions and logistics reflects an appreciation of the wider context framing relations between enslaved and free people, which stands in contrast to the dated view of plantations as islands with impermeable boundaries..... Diouf has produces a well-written and balanced account... She backs her arguments with evidence, illuminates trends, and accounts for contradictions.
Terrance M. Weik - American Historical Review

Sylviane A. Diouf has made an enormous contribution to our understanding of enslaved people's lives with her study.... Slavery's Exiles dispels the myth that maroon communities only existed in places such as the Caribbean and Brazil, firmly placing maroons of mainland North America within larger of slave resistance.... Readers interested in comparative slavery studies, the geography of enslavement, borderlands, and the social lives of enslaved people will find something of interest in Diouf's study. Slavery's Exiles will undoubtedly inspire a new generation of scholarship that places enslavement in the United States within a brader global framework.
Warren E. Milteer Jr. - The North Carolina Historical Review

The book is clear and easy to read.... Diouf's book is important because for the first time it really foregrounds marronage in North America.... Diouf extends the range by demonstrating the ubiquity of marronage in virtually every southern state. It should be required reading for any scholar of North American slavery.
Tim Lockley - Journal of American Studies

While maroon communities have received significant attention from scholars of Caribbean, Central American, and South American slavery,American historians have been slow to acknowledge the importance of marronage in the United States. In a brief historiographical discussion in the introduction to Slavery’s Exiles , Sylviane A. Diouf argues that southern historians like Eugene Genovese have deliberately pushed maroons to the margins of the history of the enslaved. Part of the reason for this inattention is a perceived dearth of primary source material, but the absence of large-scale revolts or vast maroon communities of the sort that emerged in the southern regions of the Atlantic world is also to blame. Diouf has scoured archives across the United States, examining accounts of fugitives throughout the Slave South to uncover the hidden history of American maroons, and produced a highly readable, original study that deserves a broad scholarly and popular audience.
Jonathan Daniel Wells - Journal of the Civil War Era

[Sylviane Diouf] reconstructs the lives of blacks who sought freedom and self-determination on the margins of an American slave society. Whether newly arrived from Africa or already acculturated to the demands of servitude, whether they fled to the hinterlands to live in secluded swamps or in the mountains, or to the borderlands, close to farms, plantations or towns, the maroons ran away intending to stay away, seeking autonomy even at the price of unspeakable danger. [Diouf] explains how the maroons lived, the skills and protective strategies they developed, how they sheltered themselves and traded in the underground economy, how they hunted, gathered, and even raised crops, how they stole necessary clothing, tools and livestock, and how they depended on the complicity of their enslaved companions for survival. .. The triumph here is the author's portrait of the day-to-day precariousness of maroon lives, the courage and resourcefulness required for survival, and the terrible price they paid for trying to recover their freedom. A neglected chapter of the American slave experience brought sensitively and vividly to life."
Kirkus

Slavery's Exiles covers an interesting and important topic that few people are aware existed. It is filled with fascinating individuals and remarkable acts of bravery. Hopefully [it] will spur more interest in the subject of American maroons.
Nathaniel Millett - Register of the Kentucky Historical Society

When reading about the men, women, and children who escaped slavery, general readers may first think of the Underground Railroad, which helped slaves to make their way north. But there were also maroons, slaves who instead escaped captivity by fleeing into the Southern wilderness, whether mountains or swamps. They formed their own communities or, more commonly, lived almost entirely in isolation "from the borderlands to the hinterland," operating with occasional risky crossings between the worlds of untamed wilderness and of what they left behind. Historian Diouf ... delves into the lives of the maroons and explores marronage (the different states of flight and survival) itself, from Louisiana to Virginia, through deep research in primary and secondary sources. VERDICT In writing that is deeply informative, with vivid anecdotes when available, including the horrors of punishment enacted when maroons were captured, this book is recommended to those wishing to pursue the study of American slavery beyond more general texts.—Sonnet Ireland, Univ. of New Orleans Lib.
Library Journal

[T]he stories are riveting. Readers will become familiar with colorful characters like Captain Cudjoe (...) or the man nicknamed “Forest” for his skill at hiding, and they will learn surprising facts about maroons’ participation in trade and defense, along with horrific details of punishments...[I]t’s a notable document for its treatment of the subject.
Publishers Weekly

Review of Slavery's Exiles in William and Mary Quarterly