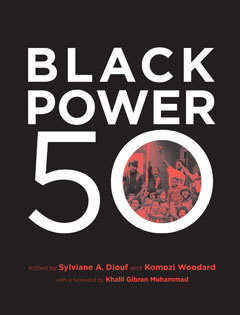 Black Power! and Ready For the Revolution
Two digital exhibitions on the Black Power movement
The New York Times review of my exhibition Black Power!

"If you're searching for cultural models, even flawed ones, that effectively brought a message of social change into the street, the schools, the workplace, people's lives, you'll have to look further afield. One place to start is the exhibition "Black Power!" at the Schomburg Center for Research in Black Culture, a branch of the New York Public Library in Harlem...

Debates continue about the origins — the when and the who — of the Black Power movement. There's a widely held view that it was a brash, fierce urban impulse replacing the gentler, rural-based civil rights movement. But the exhibition — organized by Dr. Sylviane A. Diouf, director of the Lapidus Center for the Historical Analysis of Trans-Atlantic Slavery at the Schomburg — argues that, at least initially, the two coexisted and had much in common.

“Black Power 50” is, in some ways, a collection of the greatest hits. The book grants significant real estate to the major players, events and issues. You will finish it knowing more than you did before about Newton, Seale, Eldridge Cleaver and Kathleen Cleaver, James Baldwin and Angela Davis. There are chapters on prison activism and “education for liberation.” And be it visual art, music or fashion, the aesthetics of what it means to display Black Power is beautifully depicted, in both text and archival images. At its core, “Black Power 50” serves as an excellent textbook, one that not only covers all the bases but also dives into aspects of the movement that have received scarce attention, most notably (and, for me, surprisingly) the international influence of Black Power, from a photo of members of the Australian Black Panther Party to a reminiscence from an Israeli Black Panther.

An illuminating text accompanies visuals from an exhibit commemorating the 50th anniversary of the Black Power movement.

The very phrase “black power” continues to polarize, making some fearful and others proud, often along racial lines. The editors recognize that Black Power remains “one of the least understood and most criminalized and vilified movements in American history” as well as one that, as the opening chapter puts it, “is still too often viewed as a destructive, short-lived, and politically ineffectual movement that triggered white backlash, resulted in urban rioting, and severely crippled the mainstream civil rights movement.” Though it lasted little more than a decade, undermined by the FBI and other official provocation and internal dissension, its legacy seems more vital than ever, as the Black Lives Matter movement and the racial conflagrations in cities across the country suggest how much has and hasn’t been accomplished. Chapters from academic researchers and testimonies from participants (including Kathleen Cleaver) suggest the range of the movement’s impact and implications, how it spawned similar movements among Asian Americans, Latinos, and American Indians while exhibiting a militancy that would transform progressive activism at large, as well as how it ultimately transcended both racial and national boundaries as a force for human rights. This heavily illustrated book serves as a catalog of sorts for a similarly titled exhibition curated by the Schomburg Center for Research in Black Culture, and it reflects a legacy that encompasses arts and culture (from poetry to visual arts to free jazz), educational initiatives, prison reform, and even fashion. It also illuminates how schisms between the more politically radical Marxists and those who focused more on culture and were less politically doctrinaire resulted in tensions that caused the movement to crumble from within as police and FBI officials presented plenty of outside pressure (often beyond legalities).

The text and visuals combine for an educational, eye-opening experience.