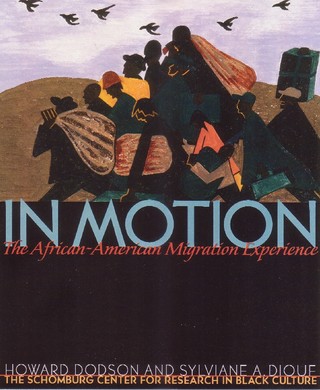 In Motion: The African-American Migration Experience

New societies, new peoples, and new communities usually originate in acts of migration. Someone or ones decide to move from one place to another. They choose a new destination and sever their ties with their traditional community or society as they set out in search of new opportunities, new challenges, new lives, and new life worlds. Most societies in human history have a migration narrative in their stories of origin. All communities in American society trace their origins in the United States to one or more migration experiences. America, after all, is "a nation of immigrants."

But until recently, people of African descent have not been counted as part of America's migratory tradition. The transatlantic slave trade has created an enduring image of black men and women as transported commodities, and is usually considered the most defining element in the construction of the African Diaspora, but it is centuries of additional movements that have given shape to the nation we know today. This is the story that has not been told.

In Motion: The African-American Migration Experience presents a new interpretation of African-American history, one that focuses on the self-motivated activities of peoples of African descent to remake themselves and their worlds. Of the thirteen defining migrations that formed and transformed African America, only the transatlantic slave trade and the domestic slave trades were coerced, the eleven others were voluntary movements of resourceful and creative men and women, risk-takers in an exploitative and hostile environment. Their survival skills, efficient networks, and dynamic culture enabled them to thrive and spread, and to be at the very core of the settlement and development of the Americas. Their hopeful journeys changed not only their world and the fabric of the African Diaspora but also the Western Hemisphere.


The New York Times
"In Motion: The African-American Migration Experience," a three-year project that cost $2.4 million, (...) is chock full of illuminating facts. It shows that in recent years, twice as many African-Americans have moved from the North to the South as from the South to other regions.

From 1995 to 2000 approximately 680,000 African-Americans moved to the South and 330,000 left, for a net gain of 350,000.
And for the first time, all the elements of the African diaspora - natives of Africa, Americans whose ancestors were enslaved Africans, Afro-Caribbeans, Central and South Americans of African descent, as well as Europeans with African or Afro-Caribbean roots - can be found in the United States.
This has happened in only the last 15 years and is prompting a far broader view of the term African-American, said Sylviane Diouf, a historian who served as the content manager for the project.

In addition to the Web site and the exhibition, the project includes a book, "In Motion: The African-American Migration Experience," released by National Geographic (...), and a Black History Month education kit, with lesson plans and a bibliography.

"It's really a new interpretation of African-American history," Ms. Diouf said. "We're seeing the centrality of migration in the African-American experience. What we're seeing now with the new immigration from Haiti, the Caribbean and Africa is a new diversity, people coming with their languages, their culture, their food."

A groundbreaking look at [the] bigger picture has been unveiled in a project called "In Motion: The African-American Migration Experience."